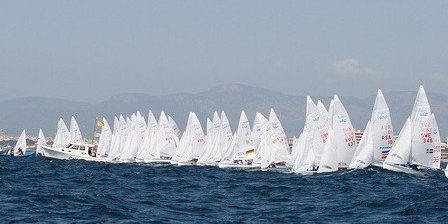 4 Irish sailors travelled to Maubisson in France, over the October break. There were 98 420s racing as well as other classes.

The 420 fleet sailed a total of seven races over the four day event.  Light conditions dominated in beautiful autumn sunshine.  On the first day, racing was abandoned due to lack of wind.  However, making the best of it, the Irish sailors played a soccer match with the French, and even got in a swim.

Over the next three days, the breeze filled in, particularly during the mornings and a total of seven races were sailed in a fairly stable light to medium SE breeze.  The fleet was split into gold and silver on the last day and two races were sailed in near perfect 14-16 knots of wind.
Both Irish teams did very well, and qualified for the gold fleet.  Jamie and Peter had a very solid outing including a 15th.  Douglas and Colin hit the pace, with best results of two 2nd’s, a 4th and a 5th.  A disappointing last race saw them slip a little and they subsequently finished in a very credible 11th position overall.