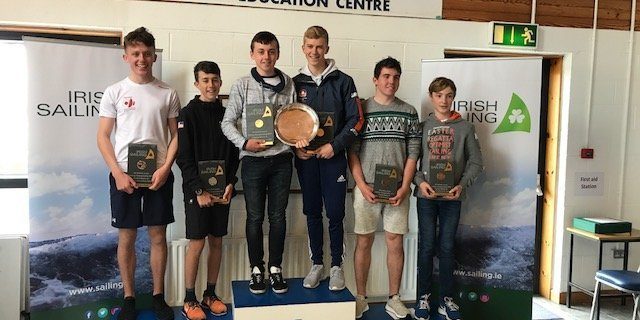 Congratulations to Michael O’Suilleabhain and Michael Carroll, the 420 class representatives, on winning the 2017 All Ireland Junior Sailing Championships at the Fastnet Marine Outdoor Educations Centre in Schull this weekend. The All Ireland Sailing Championships have been running since 1947 and this year marks the 70th anniversary of this unique Irish competition. The aim of the event is to find the “champion of champions” – pitting all types of sailors against each other in one type of boat.

The boys were lying in 3rd place after 6 races on Saturday with a series of results that included three race wins. A third place in the medal race on Sunday took the boys into a 5 point lead to win the title. Although the nomination to take part in the Championships in awarded to a helmsman and their position in a classes National Championships, it was the boys teamwork at the 420 Nationals that earned the right to represent the class. Whilst both are individually talented sailors it was their team work again that sealed the victory in the medal race that started with four boats in a position to win the title.