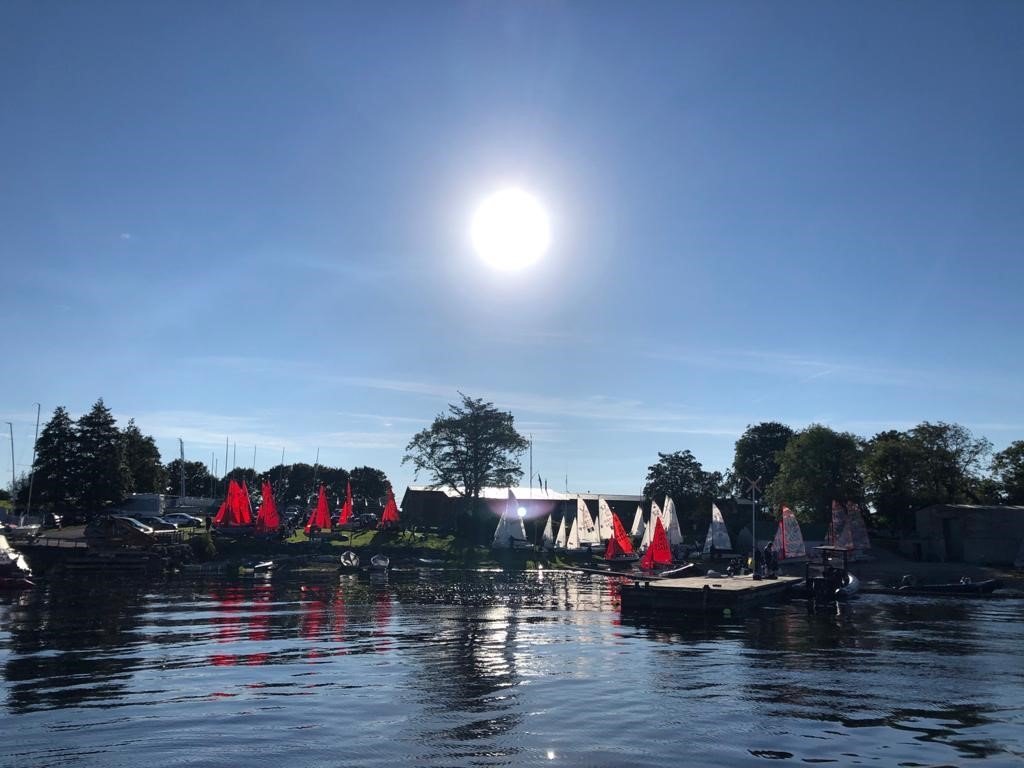 Following hot on the heals of the Irish 420 National Championships held in Dunmore East the Irish 420 Connaught Championships were held last weekend at Lough Ree Yacht Club as part of the clubs Double Ree regatta celebrating double handed youth sailing. The adrenaline rush of the open seas and big waves was replaced with two contrasting days of excellent lake sailing. Home advantage lay with the Lough Ree Yacht Club crews who had claimed both the Gold and Silver fleet honours at the nationals with some dominant displays. But this event featured contrasting results to the National Championships where Graf/Farrell previously had such a dominant display, Lough Ree in contrast produced five different race winners across the six race starts.
Saturday delivered a moderate breeze with winds strength ranging from the low teens into the low twenties blowing down the length of the lake from the north. The choppy lake waves provided a new challenge in contrast to the rollers at Dunmore east the previous week. The Race Officer David Dickson was able to run three excellent races before calling a halt to proceedings with Graf/Farrell holding a one point lead over Rickard/Pank who held a further two point lead over McDowell/Thompson in third. Each crew had one race win with the leader board looking like a game of snakes and ladders through the day, but Graf/Alexander were the more consistent crew on the day allowing them to hold the overnight lead.
Sunday dawned with clear blue skies and not a breath of wind as the sailors prepared for an early start. A light lake breeze soon settled in time for racing to commence. The light shifty breeze give the sailors plenty to think and the first race on day two went to McDowell/Thompson parachuting them into the lead temporarily. The next two races say two new race winners with race five won by a country mile by Leech/Paul and race six won by Shackelton/McDowell. Leader positions in both fleets changed frequently but the more consistent performance of Graf/Farrell and McDowell/Thompson saw both crews etch out a small advantage over the rest of the fleet. The pair were separated by half a boat length at the finish of race five handing the advantage to the Graf/Farrell crew heading into the last race. Shackelton/McDowell took the early lead of race 6 with Graf/Farrell tucked in with the leading boats and McDowell/Thompson trailing in 7th place. Steady improvements up the fleet during the race say McDowell/Thompson reach the top of the final beat just behind Graf/Farrell who had the misfortune to get a twist in their spinnaker in the reach across the top of the trapezoid course. With the spinnaker problems ironed out a game of cat and mouse began down the final leg towards the leeward mark before the final turn for home and a reach to the finish where the winners crossed the finish line a sweaty palm one boat length ahead of the Graf/Farrell team. The winning crew of McDowell/Thompson got the title on a tie break with a score of 10pts. Positions three to five were separated by only one point with Shackelton/McDowell in third on 16pts and Richard/Pank plus Leech/Paul both on 17pts.
The podium for the silver fleet say new names stepping up to take first and third placed positions. McMullan/Smyth took the title with McGrady/O’Sullivan in third and second place again going to Hauer/Micka as they done in the nationals the previous week.
Lough Ree Yacht Club are to be congratulated on running an excellent event once again with the extra organisation of Covid 19 event planning and management handled with aplomb.
1st Place Gold Fleet – Jack McDowell Malahide Yacht Club & Harry Thompson, Wexford Harbour Boat and Tennis Club.
2nd Place Gold Fleet – Ben Graf & Alexander Farrell, Lough Ree Yacht Club
3rd Place Gold Fleet– Harry Shackelton and Cara McDowell, Malahide Yacht Club
1st Place Silver Fleet – Sam McMullan & Daniel Smyth, Lough Ree Yacht Club
2nd Place Silver Fleet – Imogen Hauer & Hugo Micka, Malahide Yacht Club
3rd Place Silver Fleet – Adam McGrady & Ally O’Sullivan, Galway Bay Sailing Club