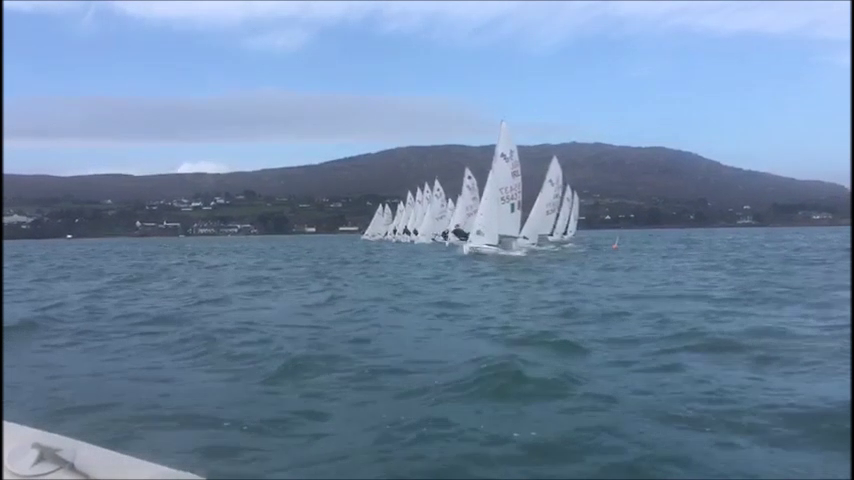 For many of the sailors travelling to Schull at the start of the school half term the week ahead surely had an ominous look as they passed through heavy snow showers on the M8 at Cashel. But Schull weather is changeable at the best of times and throughout the week the sailors had sun one minute, sleet the next  and everything in between with winds ranging from 0 to 30+ knots.

Schull week this year combined a four day training camp with the Munster Regional Championships. The purpose built Fastnet Marine and Outdoor Education Center provided the perfect venue for the 420 training camp with classroom facilities accommodating theory sessions, a modified 420 (with wheels!) for drills on land and the sheltered sailing waters immediately beside the center. Dave Harte hosted the 420 sailors at the center for the week and worked with the experienced coaching team of Graeme Grant, Camden Tougas and Ross Killian.

Day one of the Munster Championships on Friday was a victim of the strong winds but the sailors retired for the day and prepared for their Class Association dinner held that evening at the Schull Harbour Hotel. Parents were also hosted by the Class Association for a Wine and canapés evening and a discussion on the upcoming 420 events in Ireland and abroad, plus an introduction from Ross Killian on the Irish Sailing Pathway and the role of the 420 boat in the pathway.

Day two of the Munster Championships provided a day of total contrast. Dawn unveiled a mirror finish of the bay but the wind forecast provided some hope of sailing. The boats launched on schedule and after a short postponement PRO Dave Harte got race one under way only to abandon the race close to the finish as the wind melted away. A game of hide and seek for wind followed and as hope of doing any racing was fading a light breeze settled in and four races were run in order to allow the Championships to be completed with a discard. This year the Munster Championship trophy will head north to Malahide Yacht Club with Gemma Mc Dowell and Emma Gallagher. The results of the Gold and Silver fleets are as follows:

A trophy was also awarded for the training week to the crew that showed the most improvement during the week. This award was open to all 22 boats taking part during the weeks sailing and it is judged by the coaching team. The 2018 trophy was awarded to  Ben Graf and Alexander Farrell of Lough Ree Yacht Club.