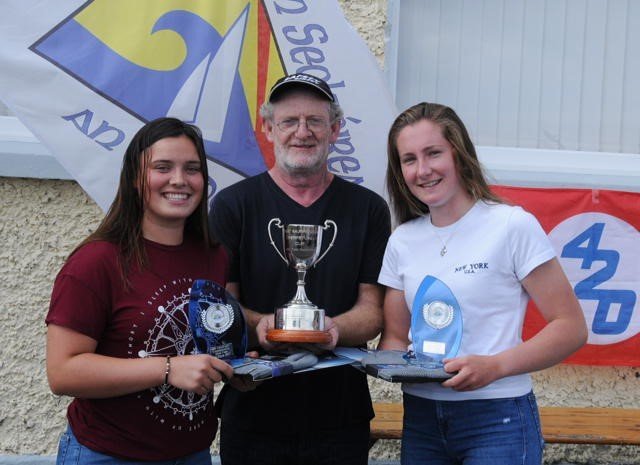 Light winds made it heavy going for sailors in the first race on Race Day 1 on an otherwise glorious day on Galway Bay.  Winds picked up sufficiently for Race 2 and Race 3 and some good racing was had by all with top spot claimed by different boats in all 3 races.  With racing over for the day we all adjourned to local hostelry Tigh Giblin where main event sponsors , Spiddal River Brewery / Tigh Giblin, laid on a delicious buffet( free to sailors) and the rest of us enjoyed some local craft beers !

Race Day 2, despite a forecast for better winds than the previous day, proved to be less kind to sailors.  Race Officer, Dave Vinnell, did a brilliant job and managed to find some wind for the only race of the day before correctly calling it a day!  A “photo” finish saw the top two boats tied on equal points after 4 races and on a count back we saw Kate Lyttle and Niamh Henry emerge victorious to claim the spoils! Congrats to them both.

Thanks to everyone who traveled as well as our own local boats and all at CSS (Spiddal) for making it a successful event.