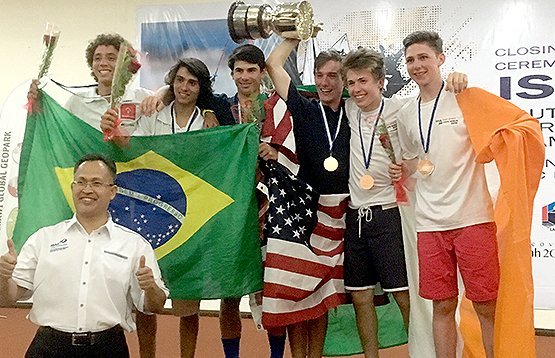 Howth Yacht Club‘s Douglas Elmes (17) and Colin O’Sullivan (16) have won a bronze medal for Ireland at the World Youth Sailing Championships that concluded in Malaysia today. The Irish National Champions sailed a consistent series in the 420 dinghy that saw them edge out a top Australian pairing in the closing stage of the nine race regatta to take Ireland’s first double–handed world youth medal in 19 years.

Irish celebrations started as soon as the boys hit the beach in Langkawi to toast the result that equals the ISAF double handed bronze won by Laura Dillon and Ciara Peelo in the Laser II dinghy two decades ago. In another boost for Irish youth sailing, it is the third youth medal in as many years for Ireland with Laser sailors Finn Lynch and Seafra Guilfoyle winning world silver in 2012 and 2014 respectively.

Strong breezes swept the pair to the top of the fleet at the early stages in the competition, stunning some of their international competition but there was no surprise in the Irish camp when the on form duo moved into third overall on Wednesday after four races. They leap–frogged last year’s Singaporean gold medallist Singapore’s Jia Yi Loh, now sailing with Matthew Lau, in fourth to include a well earned win in race three. Although they dropped to fourth and on equal points wih Brazil in race seven, a race eight disqualification for the Aussies, Alec Brodie and Xavier Winston Smith, handed a bronze opportunity – and a possible silver too – to Ireland.

In the end, Gold went to American’s Will Logue and Bram Brakman with a race to spare, the silver medal went to Brazil’s Leonardo Lombardi and Rodrigo Luz, as they had a third in the last race, to finish on 37 points.

Elmes and O’Sullivan held off a late fight back in race nine from the Australian’s and Argentina’s Felipe Martinez, Autin Diniz and Ivan Aranguren, to claim bronze on 46 points. The Australian’s scored a ninth and finished on 48 points and the Argentinian’s took a bullet for 49 points. Elmes and O’Sullivan finished 11th in the final race but had some breathing space going into the day, just enough to ensure Ireland was not going to be denied its long overdue double–handed medal.